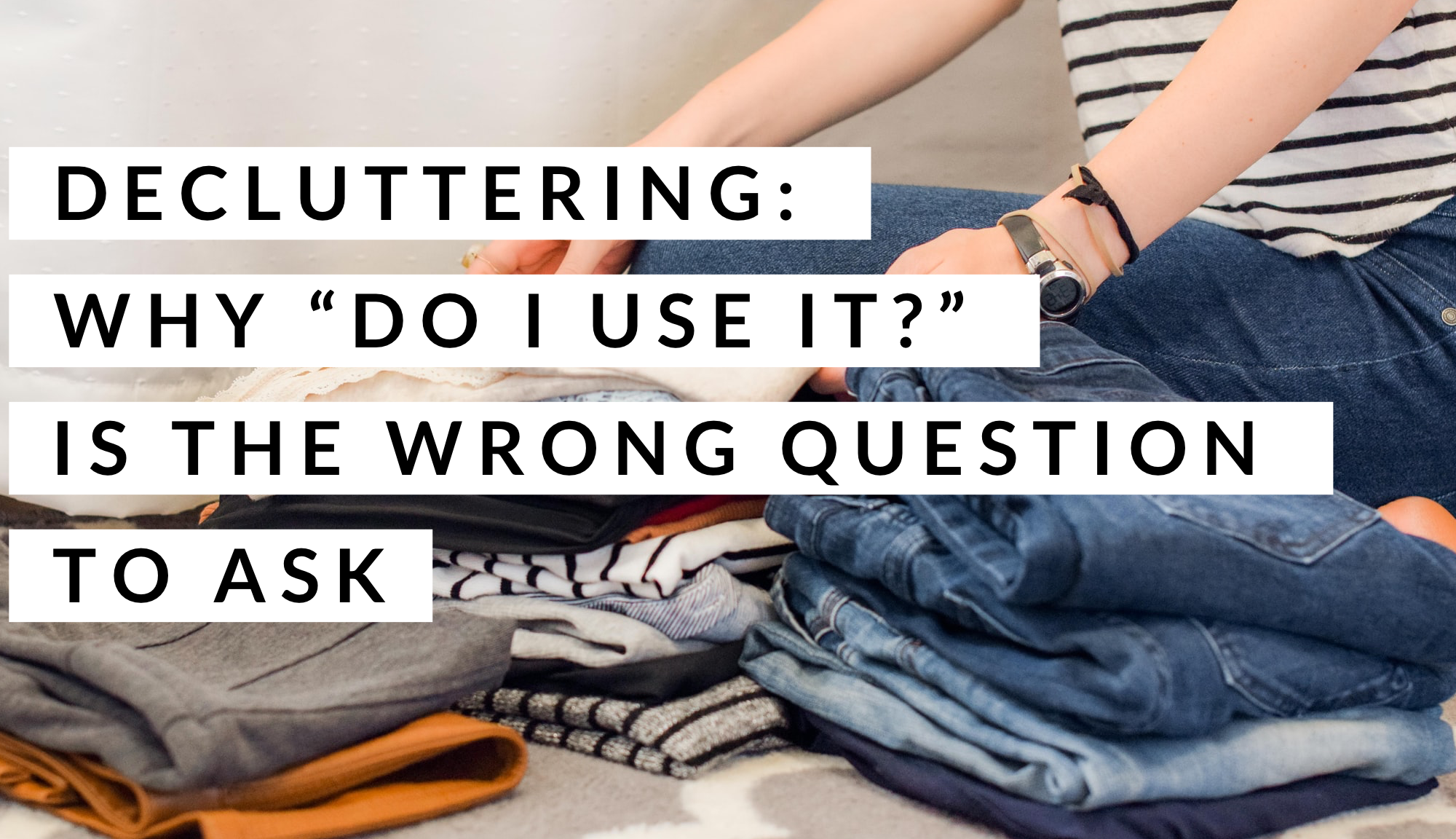 You’ve probably seen the meme: “Turn all your clothes hangers backwards. Whenever you wear something, turn the hanger the right way. In six months/a year, donate every piece of clothing still hanging on a backwards hanger”.

I know you’ve probably seen this because my mum told me about it. My test for viral is if my mum knows about it. Anyhow, she was very enthusiastic about giving this a try. I didn’t want to rain on her parade, but I don’t think it’s very good decluttering advice.

This meme is a simple and catchy application of the “do I use it?” approach to decluttering. There are two reasons why I think focusing solely on “do I use it?” isn’t helpful.

END_OF_DOCUMENT_TOKEN_TO_BE_REPLACED

Somehow, we ended up in the toy aisle, probably something to do with it being located right next to the kids pyjamas. My son was examining a display of dinosaurs from a well-known movie franchise.

“I’d really like one of these,” began his spiel.

“My friend Johnnie has one of these. He has lots of cool toys; way more than me”.

This was the first time Mr 6 had volcalised a difference I was wondering if he’d notice – most of his friends have more toys than he does, some have a lot more.

A forlorn expression sets on his face. Is he just putting it on or is my minimalism harming his self-worth? I stop freaking out and give him the facts, he likes facts.

“Johnnie does have more toys than you,” I tell him. “But, did you know those are the only toys he gets to play with? He doesn’t get to go to the toy library and choose new toys like you do.”

“He doesn’t get to go to the toy library?”, my son replies in concerned disbelief.

We’ve been using the toy library regularly since the wee guy was six months old (not that he had any interest in toys then – just as well we didn’t buy any!). He loves the toy library – every couple of weeks he gets to pick out new toys to bring home. I love it too. If there’s a toy library near you, I highly recommend using it – even if you have too many toys already.

END_OF_DOCUMENT_TOKEN_TO_BE_REPLACED Have you got too much stuff? Do you want to free up some much-needed space and create a sense of calm, but have trouble getting started?

You’re not alone. The thought of sorting through all your junk can be pretty overwhelming. It’s hard to decide where to begin and it’s easy to put it off.

To help get you started, here are three easy ways to overcome common barriers to decluttering.

END_OF_DOCUMENT_TOKEN_TO_BE_REPLACED

April has been about two things: school holidays and decluttering. Term 1 was long and we all needed a break. I get the feeling that as a parent, I’m meant to dread the school hoidays, but I like them. Don’t get me wrong, we’ve had our moments, but I enjoyed not having to be anywhere by a certain time and having my wee buddy around more.

I just completed a round of the Minimalism Game. I did this for the first time nearly three years ago – wow what a difference.

I thought it was going to be more difficult than the first time around as I don’t have the same quantity of excess stuff. Gone are the days of finding a bag full of plastic takeout cutlery (that we’d taken when we moved house, twice!), 50 or more plastic bags and hundreds of old magazines. It was even difficult to find pens that didn’t work.

END_OF_DOCUMENT_TOKEN_TO_BE_REPLACED

My first decluttering project was the linen cupboard. It was full to overflowing. I mainly used what was on the top. Putting stuff away was a delicate game of linen Jenga. One day, I took the plunge and pulled everything out. Over a couple of nap times I went through the lot. There was stuff in there I didn’t realise I had, stuff I’d never use, stuff it was time to pass along.

The result was fantastic. I knew what I had and could actually get to it all. Linen Jenga was no longer required. It was life-changing. Well, maybe not quite, but I loved the result. I wanted to do this to my whole house – now!

And then something happened. A tragedy that eventually befalls all parents of young children – my son, then two and a half, ceased napping. My child, who’d reliably slept a solid 90 minutes in the middle of the day (even during the neighbours building work), gave up napping cold turkey. Stuck in the house, during naps was the ideal opportunity to declutter. Without it, what was I going to do?

END_OF_DOCUMENT_TOKEN_TO_BE_REPLACED

At high school, I wore a uniform. It was hideous. An itchy brown jersey, yellow polo shirt and a brown box-pleat skirt. Maybe it was the height of style in the 70s when the school opened, but definitely not in the 90s when I wore it. At least we all looked hideous together. I remember my glee on the last day of school as I dumped the old thing on a desk in the school office and told them to pass it on to someone else. Finally free.

Back then, I didn’t appreciate the freedom that a school uniform gave me. Four years of freedom from deciding what to wear to school, trying to keep up with trends, arguing with my parents over what was appropriate, and spending my babysitting money on an extensive wardrobe. While my school uniform was terribly ugly, it was also beautifully simple. Twenty years on, I’m grateful to that gaudy uniform for making my teenage years simpler.

Each day, we face so many decisions. The vast majority of them are inconsequential, yet they add to our mental load. Simplifying everyday activities, like dressing, is easy, with a great payback in terms of reducing your mental load.

END_OF_DOCUMENT_TOKEN_TO_BE_REPLACED

Well, I’m a year older since my last montly update. I quietly celebrated my 40th birthday midway through December. For me, Christmas never starts until after my birthday. I managed to get the Christmas tree up by around the 20th. Christmas Day itself was my ideal – lots of food and family, but not too much. Now we are into my favourite time of year – the super lazy days between Christmas and New Year.

END_OF_DOCUMENT_TOKEN_TO_BE_REPLACED

I’ve decluttered thousands of things from my home. I love it and I want to keep it that way. I’ve also set an audacious financial goal that excites me. Does that make me immune from buying crap on impulse – no!

Despite all my good intentions, I still find myself in a shop, a prospective purchase in hand (or in my online cart), on the precipice of a not-so-great buying decision.

Occasionally, I slip up and make a random impulse purchase. However, while I’m still tempted – often – my powers of resistance are much improved. Pesky social conventions like actually buying the thing I’ve stood in line for five minutes waiting to purchase are no match for me! So, what’s my secret?

END_OF_DOCUMENT_TOKEN_TO_BE_REPLACED

Whether you just want to free up some space in your home or you’ve decided to adopt a minimalist lifestyle, you have to get rid of some stuff.

Selling your excess stuff has probably come to mind. Maybe you already tried selling a few things and it hasn’t gone quite as you’d hoped. Dreams of stuffing your pockets with wads of cash as your stuff disappears out the door can quickly turn into a nightmare. However, with some smart thinking, you can take the hassle out of the process and declutter your home, without losing your mind.

END_OF_DOCUMENT_TOKEN_TO_BE_REPLACED

I have decluttered thousands of items from my home over the last few years. I can count the number of items I sold on one hand. Selling things is not my go-to method of getting rid of my excess stuff and I don’t think it should be yours either.

When I started decluttering, the first thing to go was my Nintendo Wii. It had been sitting there, still in its box from when we’d moved into the house ­-two years ago! I loved that Wii; I managed to complete an entire 12-week fitness programme on that thing (something I’d never done before and haven’t managed since). But my life had changed, so it just sat there.

Just because I didn’t use it, didn’t mean I didn’t think about it. I’d catch a glimpse of the box under the coffee table and feel guilty – what a waste.

“Ick, I can’t be bothered with setting that up. All those cords.”

“Hmm, I should sell it. I’m never going to use it now, I can get some of the money back.”

“Right, I’m going to sell it. Better set it up to check it’s all there.”

“Ick, I can’t be bothering setting that up now, all those cords. I’ll do it later.”